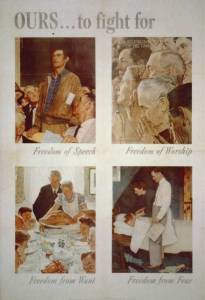 I came across a neat paragraph in Time magazine while waiting for my allergy shot the other day, and just had to address it in this column. The “American Dream” is, in many ways, what the people of the US value and as an extension of that thought, what we fight for. At left are the classic Norman Rockwell images dedicated to President Franklin D. Roosevelt’s Four Freedoms. The “American Dream” is wrapped up with the “Freedom from Want,” and the concept’s origins were discussed in Fareed Zakaria’s article, “Restoring the American Dream,” from November 1, 2010:

“The term American Dream was coined during the Great Depression The historian James Truslow Adams published The Epic of America in 1931, in an atmosphere of even greater despair than today’s. He wanted to call his book The American Dream, but his publishers objected. No one will pay $3.50 for a book about ‘a dream,’ they said. Still, Adams used the phrase so often that it entered the lexicon. The American Dream, he said, was of ‘a better, richer and happier life for all our citizens of every rank, which is the greatest contribution we have made to the thought and welfare of the world. That dream or hope has been present from the start. Ever since we became an independent nation, each generation has seen an uprising of ordinary Americans to save the American Dream from the forces which appear to be overwhelming it.'” 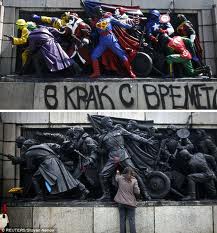 At left is one way in which the “American Dream” has manifested itself abroad ~ on a monument to the Soviet Army in Sofia, Bulgaria. An unknown artist painted the figures to appear as American cultural icons (Superman, Captain America, Santa Claus, the Joker, and Ronald McDonald) with the caption at bottom: “Moving with the times.” Some might dismiss this as sort of tongue-in-cheek, or poking fun at authority figures in some way. But it can be read differently. This painting can be read to signify the power of the Four Freedoms and the American Dream and the idea that whether some like it or not, people from all over the world identify with and react to American culture (most in a positive way, some in a negative way, and a small few in a violent way). The artist in Bulgaria is deliberately (and literally) covering an image of Soviet values with an image of American values (i.e. Superman’s “truth, justice and the American way”). This is heady stuff, that isn’t to be taken lightly.

Last point: the reader should not take from the preceding analysis that idea that American values are either perfect or universal, merely that it is clear that are deeply important to Americans and that they are meaningfully relevant to our relationship with people abroad.