Reading books is a good thing; it is better to study important books. Robert Kaplan’s new book, Monsoon: The Indian Ocean and the Future of American Power, (Random House, NY: 2010) about what he perceives as the Indian Ocean’s central role in the future of geopolitics is a book to study. He makes a number of important points that I’d like to commit as lessons to draw upon in the future. As such, I’ll boil them down to five broad categories below:

“The Cold War forced an artificial dichotomy on area studies in which the Middle East, the Indian subcontinent, and the Pacific Rim were separate identities. But as India and China become more integrally connected with both Southeast Asia and the Middle East through trade, energy, and security agreements, the map of Asia is reemerging as a single organic unit, just as it was during earlier epochs in history–manifested now by an Indian Ocean map.” (p. 13)

“‘No ocean is in need of strategic stability more than the Indian Ocean, which is arguably the most nuclearized of the seven seas.’ notes the defense analyst Thomas P.M. Barnett. ‘Among the nuclear powers whose navies ply this ocean are the United States, the United Kingdom, France, Russia, China, India, Pakistan, and Israel.'” (p. 9)

“The Indian Ocean is where the rivalry between the United States and China in the Pacific interlocks with the regional rivalry between China and India, and also with America’s fight against Islamic terrorism in the Middle East, which includes America’s attempt to contain Iran.” (p. 10)

“Today, despite the jet and information age, 90 percent of global commerce and two thirds of all petroleum supplies travel by sea. Globalization relies ultimately on shipping containers, and the Indian Ocean counts for one half of all the world’s container traffic. Moreover, the Indian Ocean rimland from the Middle East to the Pacific accounts for 70 percent of the traffic of petroleum products for the entire world.” (p. 7)

“India’s and China’s aspirations for great-power status, as well as their quest for energy security, have compelled them ‘to redirect their gazes from land to the seas’ write James R. Holmes and Toshi Yoshihara, associate professors at the US Naval War College.” (p. 9)

3. Origins of the West in the East

“Half a millennium ago [1497-98], Vasco da Gama braved storm and scurvy to round Africa and cross the Indian Ocean to the Subcontinent…Da Gama’s arrival in India initiated the rise of the West in Asia.” (p. xii)

“The Indian Ocean began its modern history as a Portuguese imperial lake. Within two decades of Vasco Da Gama’s voyage in 1498, the Portuguese came to dominate the most important sea routes and trading networks between East Africa and modern-day Indonesia.” (p. 49)

“Arguably, Portugal’s efforts in the Indian Ocean constituted nothing less than an Eighth Crusade. While the previous seven had focused on the Levant (the Muslim lands abutting the eastern Mediterranean), this one sought conquests much farther east, where of the four great empires in the region–Ottoman Turkey, Safavid Iran, Mughal India, and Ming China–three were Muslim.” (p. 51).

“Believing themselves a chosen people destined to be the sword of the faith, the Portuguese show us a religious nationalism as doughty and often extreme as any in history. Portugal’s spectactualar and sweeping conquest of the Indian Ocean littoral falls into a category similar to to that of the Arab conquest of North Africa nine centuries earlier. In the post-national West, we would do well to remember that morale is still the key to military victory: in particular, a morale fortified by a narrow, unshakeable conviction, which often has been the product of religion and nationalism. What the medieval Arabs and the late-medieval Portuguese once embodied challenges us to this day. To a significant extent, American power will depend on how it confronts fanatical enemies who believe more firmly than it does.” (p. 57)

Kaplan begins “Chapter 15: China’s Two-Ocean Strategy?” by listing the decline in the size of the U.S. Navy over time (Cold War roughly 600 ships, 1990s more than 350, today fewer than 280). Below one can see a graphic depiction. 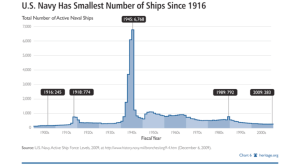 “China’s ascendancy can be fairly compared with that of the United States following its own consolidation of land-based power in the aftermath of the Civil War and the settlement of the American West, which culminated at the turn of the twentieth century with the construction of the Panama Canal…China’s society is every bit as dynamic now as America’s was a century ago.” (p. 279)

“…it is too facile to suggest that China is acquiring naval power strictly as a means to the end of regional or perhaps global hegemony. Empires are often not sought consciously. Rather, as states become stronger, they develop needs and–counterintuitively–a whole new set of insecurities that lead them to expand overseas in an organic fashion.” (p. 279)

“…the U.S. depends on China for affordable goods and to prop up its currency with trillions of dollars of Chinese deposits, and China depends on the U.S. as its principal consumer market…Therefore, the most likely scenario in my mind for relations with China is something quite nuanced: the United States will both compete and cooperate with China. The American-Chinese rivalry of the future could give new meaning to the word ‘subtlety,’ especially in its economic and diplomatic arrangements. Yet, if this relationship has its hard edges, I expect one of those to be where the two countries’ navies interact: in the Greater Indian Ocean and western Pacific.” (p. 280)

Indian Neo-Curzonism (after Lord George Curzon, viceroy of India 1899 to 1905)

“C. Raja Mohan, a professor at New Delhi’s Nehru University, explains that all of his countrymen who now dream of a Greater India–a zone of quiet and informal influence reaching across much of southern Asia and the Indian Ocean–find Curzon ‘a source of strategic inspiration.'” (p. 181)

“Neo-Curzonism is a tendency among those Indian strategic thinkers who anticipate continued economic growth in their country, and a foreign policy that should follow from it. It might be tempting to compare it to American neoconservatism. After all, it is an imperial-like vision that desires national greatness based on big ideas. But whereas neoconservatives seek to impose America’s ideals and system of governance abroad, neo-Curzonians are content with alliances with nondemocratic systems different from India’s own. Neo-Curzonians understand limits. They seek a return to Indian preeminence mainly within India’s geographical sphere of influence. (p. 182)

“A neo-Curzonian policy would seek to diminish the national borders of Pakistan, Bangladesh, and Burma not through conquest, but through the revival of commercial cooperation with these countries, abetted by the development of roads and regional energy piplelines.” (p. 183)

“Squeezed into a territory the size of Iowa–20 to 60 percent of which floods every year–lives a population half that of the United States and larger than the population of Russia [150 million]. Bangladesh’s Muslim population alone (83 percent of the total) is nearly twice that of Egypt’s or Iran’s. Bangladesh is considered small only because it is surrounded on three sides by India. Actually, it is vast: a veritable aquatic culture where getting around by boat and vehicle, as I learned, can take many days.” (p. 140)

Why I’m not in the Navy