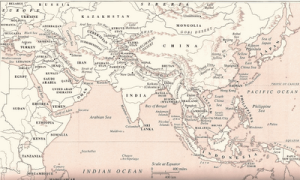 P. 244: “With well over 200 million of its 240 million inhabitants Muslim, Indonesia represents one of Islam’s greatest proselytizing success stories. This is particularly remarkable because Islam came to Indonesia not through military conquest as it did almost everywhere else, from Iberia to the Indian Subcontinent, but, starting in Aceh in the Middle Ages, through seaborne Indian Ocean commerce.”

P. 243: “Half the people in the world who live within seven miles of an active volcano life in Indonesia.”
P. 249: “While Western democracy is a very contentious issue in the Middle East, associated as it is with Iraq and the vision of former president George W. Bush, in places like India and Indonesia in South and Southeast Asia, where half a billion Muslims actually live—compared to 300 million in the Arab world—Western democracy is simply beyond reproach. ‘In Indonesia,’ said [Fuad Jabali, the deputy director for academic affairs at Jakarta’s State Islamic University], a madrassa graduate, ‘anyone who advocates an Islamic state over democracy will not be supported at the polls. Here maybe five percent of the voters support radical groups…which advocate a caliphate, and only ten percent are in favor of dismembering the hands of thieves.’ The democracy that Bush tried to build violently in Iraq is developing peacefully in Indonesia without his help.”
Burma’s Strategic Importance

P. 217: “Burma fronts on the Indian Ocean, by way of the Bay of Bengal. It is bordered by India and China, both of which covet Burma’s abundant reserves of oil, natural gas, uranium, coal, zinc, copper, precious stones, timber, and hydropower. China, especially, desires Burma as a vassal state for the construction of deep-water ports, highways, and energy pipelines that will provide China’s landlocked south and west access to the sea, from where China’s ever-burgeoning middle class can receive deliveries of oil from the Persian Gulf…In short, Burma provides a code for understanding the world to come. It is a prize to be fought over, as China and India are not so subtly doing.”
P. 222: “NGOs like to claim that they are above politics. Not true. The very act of providing aid assists one side or another, however indirectly. NGOs take sides all the time.” -Member of “Free Burma Rangers” NGO
P. 226: “China’s drive southward and India’s drive both westward and eastward—to keep it from being strategically encircled by China’s navy—means that both powers collide in Burma. As China and India vie for power and influence, Burma has become a quiet, strategic battleground.”
Mullen’s Approach to Seapower

“Where the old ‘Maritime Strategy’ focused on sea control,” Admiral Michael Mullen, Chairman of the Joint Chiefs of Staff, said in 2006 (when he was chief of naval operations), “the new one must recognize that the economic tide of all nations rises not when the seas are controlled by one [nation], but rather when they are made safe and free for all.”

“Admiral Mullen went on: “I’m after that proverbial 1,000 ship Navy—a fleet-in-being, if you will, comprised of all freedom-loving nations, standing watch over the seas, standing watch over each other.”
“As grandiose and platitudinous as Admiral Mullen’s words may sound, it is in fact a realistic response to America’s own diminished resources. The U.S. will be less and less able to go it alone and so will rely increasingly on coalitions, for national navies tend to cooperate better than national armies, partly because sailors are united by a kind of fellowship of the sea, born of their shared experience facing violent natural forces.”
Kaplan’s Final Analysis – US Strategy
P. 292-93:
“The United States must eventually see its military not primarily as a land-based meddler, caught up in internal Islamic conflict, but as a naval- and air-centric balancer, lurking close by, ready to intervene in tsunami- and Bangladesh-type humanitarian emergencies, and working in concert with both the Chinese and Indian navies as part of a Eurasian maritime system. This will improve America’s image in the former third world. While America must always be ready for war, it must work daily to keep the peace: indispensability, not dominance, should be its goal. Such a strategy will mitigate the possible dangers of China’s rise. Even in elegant decline, this is a time of unprecedented opportunity for Washington, which must be seen in Monsoon Asia as the benevolent outside power.
Western penetration of the Indian and western Pacific oceans began bloodily with the Portuguese at the end of the fifteenth century. The supplanting of the Portuguese by the Dutch, and the Dutch by the English, came also with its fair share of blood. Then there was the supplanting of the English by the Americans in the high seas of Asia, which came via the bloodshed of World War II. Therefore, a peaceful transition away from American unipolarity at sea toward an American-Indian-Chinese condominium of sorts would be the first of its kind. Rather than an abdication of responsibility, such a transition would leave the Greater Indian Ocean in the free and accountable hands of indigenous Asian nations for the first time in five hundred years. The shores of the twenty-first centry’s most important body of water lack a superpower, and that is, in the final analysis, the central fact of its geography. China’s two-ocean strategy, should it ever be realized, will not occur in a vacuum, but will be constrained by the navies of other nations, and that will make all the difference.”