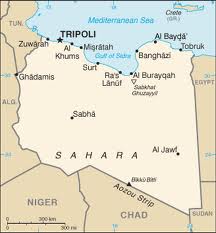 In March, President Obama outlined his policy goals for the violence in Libya. He began by discussing the context:

In this particular country — Libya — at this particular moment, we were faced with the prospect of violence on a horrific scale. We had a unique ability to stop that violence: an international mandate for action, a broad coalition prepared to join us, the support of Arab countries, and a plea for help from the Libyan people themselves. We also had the ability to stop Gadhafi’s forces in their tracks without putting American troops on the ground.

He then assessed the “important” American strategic interest in preventing Gadhafi from killing those who oppose him:

A massacre would have driven thousands of additional refugees across Libya’s borders, putting enormous strains on the peaceful — yet fragile — transitions in Egypt and Tunisia. The democratic impulses that are dawning across the region would be eclipsed by the darkest form of dictatorship, as repressive leaders concluded that violence is the best strategy to cling to power. The writ of the United Nations Security Council would have been shown to be little more than empty words, crippling that institution’s future credibility to uphold global peace and security. So while I will never minimize the costs involved in military action, I am convinced that a failure to act in Libya would have carried a far greater price for America.

That is the justification for action to apply protective violence to deter Gadhafi’s forces from killing civilians (part of the Responsibility to Protect norm). The military means to achieve this goal:

And so at my direction, America led an effort with our allies at the United Nations Security Council to pass a historic resolution that authorized a no-fly zone to stop the regime’s attacks from the air, and further authorized all necessary measures to protect the Libyan people.

And, the limits to American involvement as well as the counterargument to those who wished to pursue regime change:

Now, just as there are those who have argued against intervention in Libya, there are others who have suggested that we broaden our military mission beyond the task of protecting the Libyan people, and do whatever it takes to bring down Gadhafi and usher in a new government.

Of course, there is no question that Libya — and the world — would be better off with Gadhafi out of power. I, along with many other world leaders, have embraced that goal, and will actively pursue it through non-military means. But broadening our military mission to include regime change would be a mistake.

From today’s perspective, considering that Gadhafi’s regime is over, this appears to be one of the most successful U.S. interventions ever. It cost $896 million, a drop in the bucket compared to the roughly $1.29 trillion Iraq and Afghanistan cost between them. Afghanistan is costing about $120 billion in 2011, as such, on the back of the envelope Libya seems worth 1/100th of “an Afghanistan.”
More important than cost, however, is the fact that this was done collaboratively with the support of a international coalition. The United States may be the most powerful nation in the world, but that is not the true source of it’s strength: it is actually the ability to forge and lead international coalitions to take action in its broad interest. There was a perception that Iraq tarnished that credibility to lead globally; Libya is a “win” in more than just regime change ~ it bought the US some renewed faith from old allies and friends. It remains to be seen if this lasts, but for now it is a good news story for the USA.
The last point is that of strategy. Hans Delbruck wrote of two basic types: strategies of annihilation and strategies of exhaustion. I think Americans in general, and American military officers in particular, are leery of strategies of exhaustion especially when the military is not the focus of the national effort. There was a resident lack of strategic patience with respect to Libya that did not pop up in Iraq or Afghanistan (where the mantra “stay the course” could be heard daily in Washington).
This is a case in which this type of strategy worked; admittedly, because Libya is such a small country and therefore easy to choke off from the world. That’s not to say that a non-military strategy of exhaustion is the way to go for all situations, just that it can work when the circumstances are right. Finally, as Stephen Walt has written, the hard work is just beginning and it remains to be seen whether this was the right course of action. As always, only time will tell.