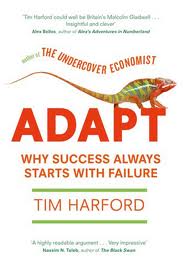 Tim Harford has written an excellent book, Adapt: Why Success Always Starts with Failure – that in my humble opinion should be at the top of reading list for every member of the US military responsible for leading the organization at large.

Harford’s basic premise is that the world’s problems/challenges are much too complex for the human mind (or computers, for that matter) to solve via comprehensive solutions (often top-down). Instead of the silver bullet, we ought to opt for the Darwin/evolution-informed approach (or, the “silver buckshot”). Harford offers many examples of the superiority of this approach (one being my former unit – 3rd Armored Cavalry Regiment headed by COL HR McMaster – in Tal Afar, Iraq) as opposed to a rigid and dogmatic, one-solution-for-all-problems approach. I won’t elaborate on these here, as I’m more interested in cataloging the general lessons as opposed to specific information.

I first caught on to the book by reading a column written by David Brooks of the NY Times. So I picked Adapt (Farrar, Straus and Giroux, New York, 2011) up from the library, and this is what I learned:

Pg. 224: “There are three essential steps to using the principles of adapting in business an everyday life, and they are in essence the Palchinsky principles. First, try new things, expecting that some will fail. Second, make failure survivable: create safe spaces for failure or move forward in small steps…the trick here is finding the right scale in which to experiment: significant enough to make a difference, but not such a gamble that you’re ruined if it fails. And third, make sure you know when you’ve failed, or you will never learn.”

Pg. 25: “the first principle could simply be expressed as ‘variation’…the middle ‘survivability’…the third as ‘selection'”.

Pg. 255-56: Denial, because we cannot separate error from self-worth; self-destructive behavior, because we compound losses trying to compensate for them; rose-colored glasses, because we often reinterpret failures as successes.

Pg. 259: John Kay, in The Truth About Markets, wrote about “disciplined pluralism” in an effort to describe how markets work – it is “exploring many new ideas but ruthlessly cutting down the ones that fail, whether they are brand-new or hundreds of years old.”

When applied more expansively, “Pluralism matters because life is not worth living without new experiences…But discipline matters too…we must sometimes commit to what is working. Equally important: sometimes we need to make the opposite kind of commitment, and decide that the toxic job and the toxic boyfriend are simply not worth the amount of life they cost.”

**Late addition ~ all this sits well with what Sir Michael Howard wrote in 1974 about the miliary’s capacity to adapt to emergent circumstances:
“I am tempted indeed to declare dogmatically that whatever doctrine the Armed Forces are working on now, they have got it wrong. I am also temped to declare that it does not matter that they have got it wrong. What does matter is their capacity to get it right quickly when the moment arrives…it is the task of military science in an age of peace to prevent the doctrines from being too badly wrong.”[i]
[i] Michael Howard and A.J. Wilson, ‘Military Science in an Age of Peace’, The RUSI Journal, 119: 1, 1974, p. 7.