*Note: This essay was published in the Colorado Springs Gazette print edition on December 21, 2018. It can also be found online here, an image of the column is included below, as well as the text of the essay. 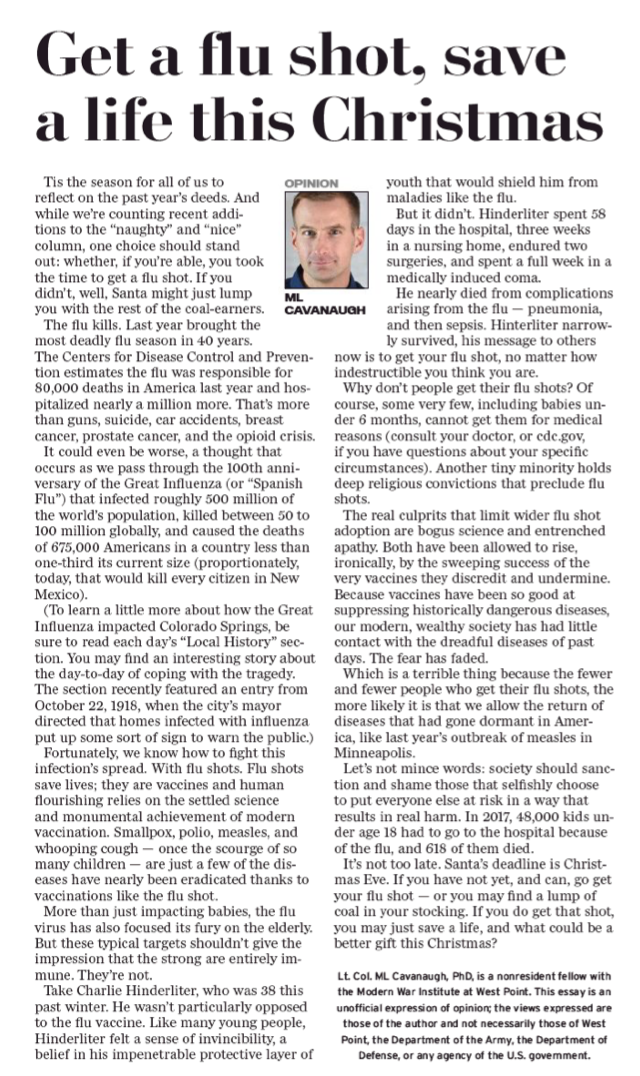 Tis the season for all of us to reflect on the past year’s deeds. And while we’re counting recent additions to the “naughty” and “nice” column, one choice should stand out: whether or not, if you’re able, you took the time to get a flu shot. If you didn’t, well, Santa may just lump you with the rest of the coal-earners.

It could even be worse, a thought that occurs as we pass through the one-hundredth anniversary of the Great Influenza (or “Spanish Flu”) that infected roughly 500 million of the world’s population, killed between 50 to 100 million globally, and caused the deaths of 675,000 Americans in a country less than one-third its current size (proportionately, today, that would kill every citizen in New Mexico).

(To learn a little more about how the Great Influenza impacted Colorado Springs, be sure to read each day’s “Local History” section. You may find an interesting story about the day-to-day of coping with the tragedy. The section recently featured an entry from October 22, 1918, when the city’s mayor directed that homes infected with influenza put up some sort of sign to warn the public.)

Fortunately, we know how to fight this infection’s spread. With flu shots. Flu shots save lives; they are vaccines and human flourishing relies on the settled science and monumental achievement of modern vaccination. Smallpox, polio, measles, and whooping cough—once the scourge of so many children—are just a few of the diseases have nearly been eradicated thanks to vaccinations like the flu shot.

More than just impacting babies, the flu virus has also focused its fury on the elderly. But these typical targets shouldn’t give the impression that the strong are entirely immune. They’re not.

Take Charlie Hinderliter, who was 38 this past winter. He wasn’t particularly opposed to the flu vaccine. Like many young people, Hinderliter felt a sense of invincibility, a belief in his own impenetrable protective layer of youth that would shield him from maladies like the flu.

But it didn’t. Hinderliter spent 58 days in the hospital, three weeks in a nursing home, endured two surgeries, and spent a full week in a medically-induced coma. He nearly died from complications arising from the flu—pneumonia, and then sepsis. Hinterliter narrowly survived, his message to others now is to get your flu shot, no matter how indestructible you think you are.

Why don’t people get their flu shots? Of course, some very few, including babies under 6 months, cannot get them for medical reasons (consult your doctor, or cdc.gov, if you have questions about your specific circumstances). Another tiny minority holds deep religious convictions which preclude flu shots.

The real culprits that limit wider flu shot adoption are bogus science and entrenched apathy. Both have been allowed to rise, ironically, by the sweeping success of the very vaccines they discredit and undermine. Because vaccines have been so good at suppressing historically dangerous diseases, our modern, wealthy society has had little contact with the dreadful diseases of past days. The fear has faded.

Which is a terrible thing because the fewer and fewer people that get their flu shots, the more likely it is that we allow the return of diseases that had gone dormant in America, like last year’s outbreak of measles in Minneapolis.

Let’s not mince words: society should sanction and shame those that selfishly choose to put everyone else at risk in a way that results in real harm. In 2017, 48,000 kids under age 18 had to go to the hospital due to the flu. 618 of them died.

It’s not too late. Santa’s deadline is Christmas Eve. If you have not yet, and can, go get your flu shot—or you may find a lump of coal in your stocking. If you do get that shot, you may just save a life, and what could be a better gift this Christmas?