*Note: This essay was published in the Colorado Springs Gazette print edition on March 26, 2019. It can also be found online here, an image of the column is included below, as well as the text of the essay. 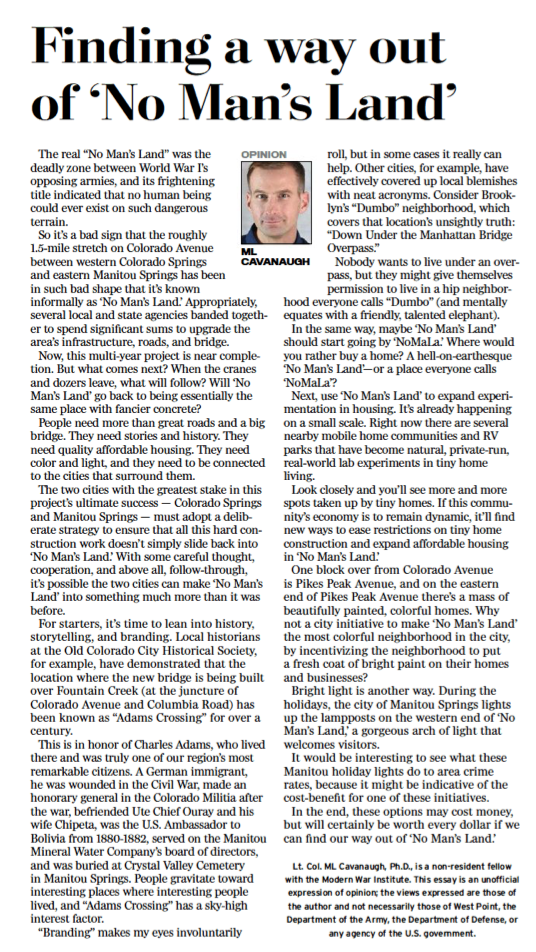 The real “No Man’s Land” was the deadly zone between World War I’s opposing armies, and its frightening title indicated that no human being could ever exist on such dangerous terrain.

So it’s a bad sign that the roughly 1.5-mile stretch on Colorado Avenue between western Colorado Springs and eastern Manitou Springs has been in such bad shape that it’s known informally as ‘No Man’s Land.’ Appropriately, several local and state agencies banded together to spend significant sums to upgrade the area’s infrastructure, roads, and bridge.

Now, this multi-year project is near completion. But what comes next? When the cranes and dozers leave, what will follow? Will ‘No Man’s Land’ go back to being essentially the same place with fancier concrete?

People need more than great roads and a big bridge. They need stories and history. They need quality affordable housing. They need color and light, and they need to be connected to the cities that surround them.

The two cities with the greatest stake in this project’s ultimate success — Colorado Springs and Manitou Springs — must adopt a deliberate strategy to ensure that all this hard construction work doesn’t simply slide back into ‘No Man’s Land.’ With some careful thought, cooperation, and above all, follow-through, it’s possible the two cities can make ‘No Man’s Land’ into something much more than it was before.

For starters, it’s time to lean into history, storytelling, and branding. Local historians at the Old Colorado City Historical Society, for example, have demonstrated that the location where the new bridge is being built over Fountain Creek (at the juncture of Colorado Avenue and Columbia Road) has been known as “Adams Crossing” for over a century.

This is in honor of Charles Adams, who lived there and was truly one of our region’s most remarkable citizens. A German immigrant, he was wounded in the Civil War, made an honorary general in the Colorado Militia after the war, befriended Ute Chief Ouray and his wife Chipeta, was the U.S. Ambassador to Bolivia from 1880-1882, served on the Manitou Mineral Water Company’s board of directors, and was buried at Crystal Valley Cemetery in Manitou Springs. People gravitate toward interesting places where interesting people lived, and “Adams Crossing” has a sky-high interest factor.

“Branding” makes my eyes involuntarily roll, but in some cases it really can help. Other cities, for example, have effectively covered up local blemishes with neat acronyms. Consider Brooklyn’s “Dumbo” neighborhood, which covers that location’s unsightly truth: “Down Under the Manhattan Bridge Overpass.”

Nobody wants to live under an overpass, but they might give themselves permission to live in a hip neighborhood everyone calls “Dumbo” (and mentally equates with a friendly, talented elephant).

In the same way, maybe ‘No Man’s Land’ should start going by ‘NoMaLa.’ Where would you rather buy a home? A hell-on-earthesque ‘No Man’s Land’—or a place everyone calls ‘NoMaLa’?

Next, use ‘No Man’s Land’ to expand experimentation in housing. It’s already happening on a small scale. Right now there are several nearby mobile home communities and RV parks that have become natural, private-run, real-world lab experiments in tiny home living.

Look closely and you’ll see more and more spots taken up by tiny homes. If this community’s economy is to remain dynamic, it’ll find new ways to ease restrictions on tiny home construction and expand affordable housing in ‘No Man’s Land.’

One block over from Colorado Avenue is Pikes Peak Avenue, and on the eastern end of Pikes Peak Avenue there’s a mass of beautifully painted, colorful homes. Why not a city initiative to make ‘No Man’s Land’ the most colorful neighborhood in the city, by incentivizing the neighborhood to put a fresh coat of bright paint on their homes and businesses?

Bright light is another way. During the holidays, the city of Manitou Springs lights up the lampposts on the western end of ‘No Man’s Land,’ a gorgeous arch of light that welcomes visitors.

It would be interesting to see what these Manitou holiday lights do to area crime rates, because it might be indicative of the cost-benefit for one of these initiatives.

In the end, these options may cost money, but will certainly be worth every dollar if we can find our way out of ‘No Man’s Land.’