*Note: This essay was published in the Colorado Springs Gazette print edition on May 13, 2019. It can also be found online here, an image of the column is included below, as well as the text of the essay. 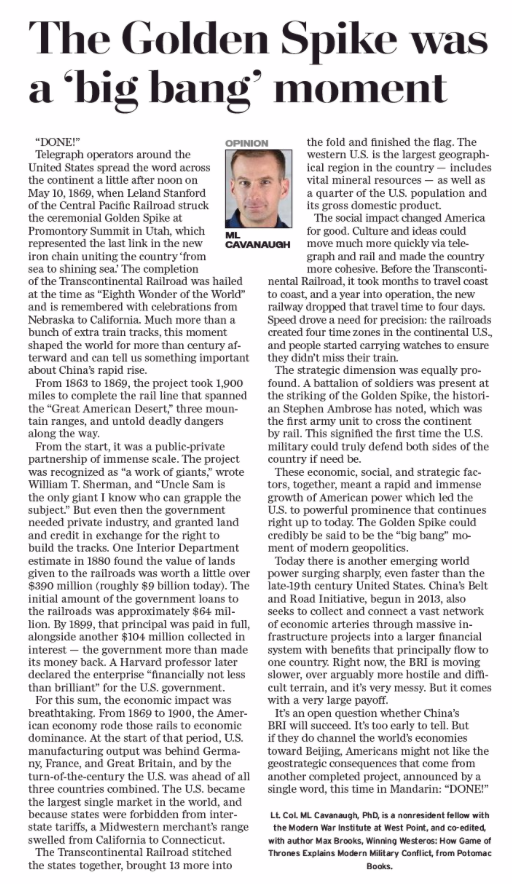 Telegraph operators around the United States spread the word across the continent a little after noon on May 10, 1869, when Leland Stanford of the Central Pacific Railroad struck the ceremonial Golden Spike at Promontory Summit in Utah, which represented last link in the new iron chain uniting the country ‘from sea to shining sea.’ The completion of the Transcontinental Railroad was hailed at the time as “Eighth Wonder of the World,” and will be remembered today with celebrations from Nebraska to California. Much more than a bunch of extra train tracks, this moment shaped the world for more than century afterward, and can tell us something important about China’s rapid rise.

From 1863 to 1869, the project took 1,900 miles to complete the rail line that spanned the “Great American Desert,” three mountain ranges, and untold deadly dangers along the way.

From the start, it was a public-private partnership of immense scale. The project was recognized as “a work of giants,” wrote William T. Sherman, and “Uncle Sam is the only giant I know who can grapple the subject.” But even then the government needed private industry, and granted land and credit in exchange for the right to build the tracks. One Interior Department estimate in 1880 found the total value of lands given to the railroads was worth a little over $390 million (roughly $9 billion today). The initial amount of the government loans to the railroads was approximately $64 million. By 1899, that principal was paid in full, alongside another $104 million collected in interest—the government more than made its money back. A Harvard professor later declared the enterprise “financially not less than brilliant” for the U.S. government.

For this sum, the economic impact was breathtaking. From 1869 to 1900, the American economy rode those rails to economic dominance. At the start of that period, U.S. manufacturing output was behind Germany, France, and Great Britain, and by the turn-of-the-century the U.S. was ahead of all three countries combined. The U.S. became the largest single market in the world, and because states were forbidden from interstate tariffs, a Midwestern merchant’s range swelled from California to Connecticut.

The Transcontinental Railroad stitched the states together, brought 13 more into the fold and finished the flag. The western U.S. is the largest geographical region in the country; includes vital mineral resources; as well as a quarter of both the U.S. population and its gross domestic product.

As important, the social impact changed America for good. Culture and ideas could move much more quickly via telegraph and rail and made the country more cohesive. Before the Transcontinental Railroad, it took months to travel coast-to-coast, and a year into operation, the new railway dropped that travel time to 4 days. Speed drove a need for precision: the railroads created four time zones in the continental U.S., and people started carrying watches to ensure they didn’t miss their train.

The strategic dimension was equally profound. A battalion of soldiers was present at the striking of the Golden Spike, the historian Stephen Ambrose has noted, which was the first army unit to cross the continent by rail. This signified the first time the U.S. military could truly defend both sides of the country if need be.

These economic, social, and strategic factors, together, meant a rapid and immense growth of American power which led the U.S. to powerful prominence that continues right up to today. The Golden Spike could credibly be said to be the “big bang” moment of modern geopolitics.

Today, of course, there is another emerging world power surging sharply, even faster than the late-19th century United States. China’s Belt and Road Initiative, begun in 2013, also seeks to collect and connect a vast network of economic arteries through massive infrastructure projects into a larger financial system with benefits that principally flow to one country. Right now, the BRI is moving slower, over arguably more hostile and difficult terrain, and it’s a very messy process. But it comes with a very large payoff.

It’s an open question whether China’s BRI will succeed. Too early to tell. But if they do channel the world’s economies toward Beijing, Americans may not like the geostrategic consequences that come from the completion of another completed project, announced by a single word, this time in Mandarin: “DONE!”