*Note: This essay was published in the Wall Street Journal print edition on October 29, 2019. Images from the actual print story, as well as text can be found below; it can also be found online here. 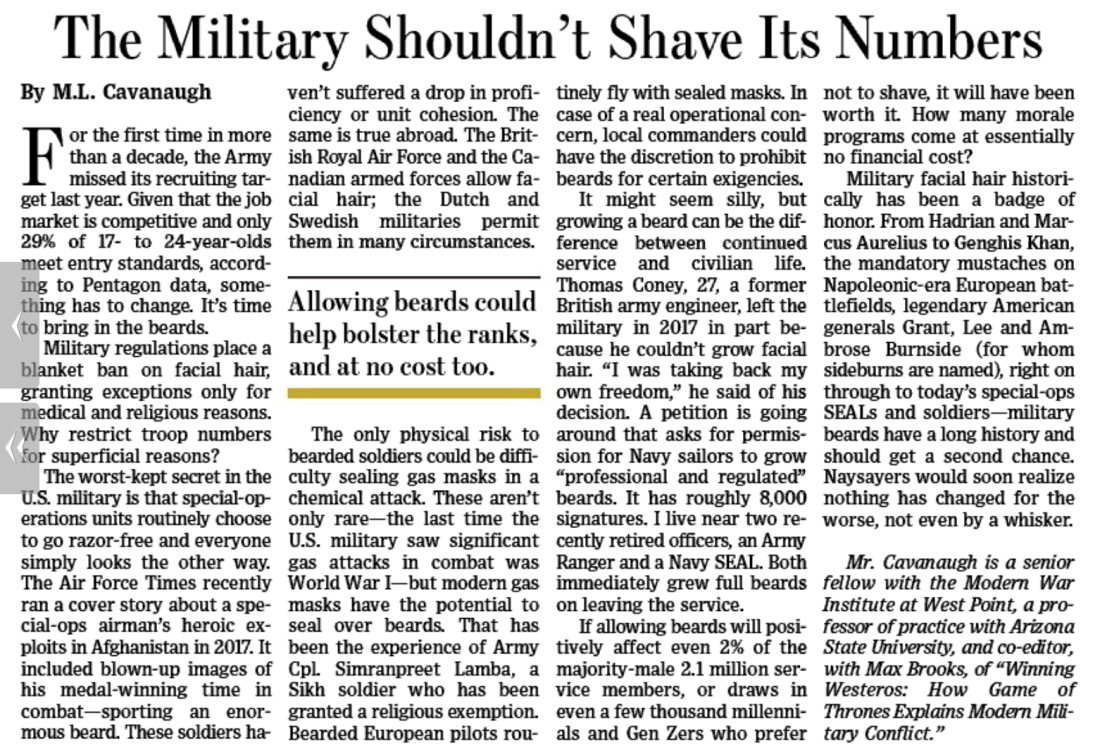 For the first time in more than a decade, the Army missed its recruiting target last year. Given that the job market is competitive and only 29% of young people, ages 17 to 24, meet entry standards, according to Pentagon data, something has to change. It’s time to bring in the beards.

The worst-kept secret in the U.S. military is that special-operations units routinely choose to go razor-free and everyone simply looks the other way. The Air Force Times recently ran a cover story about a special-operations airman’s heroic exploits in Afghanistan in 2017. It included blown-up images of his medal-winning time in combat—sporting an enormous beard. These soldiers haven’t suffered a drop in proficiency or unit cohesion. The same is true abroad. The British Royal Air Force and the Canadian armed forces allow facial hair; the Dutch and Swedish militaries permit them in many circumstances.

The only physical risk to bearded soldiers could be difficulty in sealing gas masks in a chemical attack. These are not only rare—the last time the U.S. military saw significant gas attacks in combat was World War I—but modern gas masks have the potential to seal over beards. That has been the experience of Army Corporal Simranpreet Lamba, a Sikh soldier who has been granted a religious exemption to the policy. Likewise, bearded European NATO pilots routinely fly with sealed masks. In case there is a real operational concern, the military could always allow local commanders to prohibit beards for certain exigencies.

It may seem silly to some, but growing a beard can be the difference between continued service and civilian life. Thomas Coney, a former British army engineer, recently said he left the military in 2017 in part because he couldn’t grow facial hair. “I was taking back my own freedom,” the 27-year-old said of his decision. There’s currently a petition going around asking for permission for Navy sailors to grow “professional and regulated” beards. It has roughly 8,000 signatures. I live near two recently retired officers—an Army Ranger and a Navy SEAL. Both immediately grew full beards on leaving the service.

If allowing beards will positively affect even 2% of the majority-male 2.1 million service members, or draws in just a few thousand millennials and Gen Zers who prefer not to shave, it will have been worth it. How many morale programs come at essentially no financial cost?

Military facial hair historically has been a badge of honor. From Hadrian and Marcus Aurelius to Genghis Khan, the mandatory mustaches on Napoleonic-era European battlefields, legendary American generals Grant, Lee and the progenitor of the term “sideburns,” Ambrose Burnside, right on through to today’s special-ops SEALs and soldiers—military beards have a long history and should get a second chance. Naysayers would soon realize nothing has changed for the worse, not even by a whisker.