*Note: This essay was published in the Colorado Springs Gazette print edition on March 8, 2020. An image of the column is included below, as well as the text of the essay. 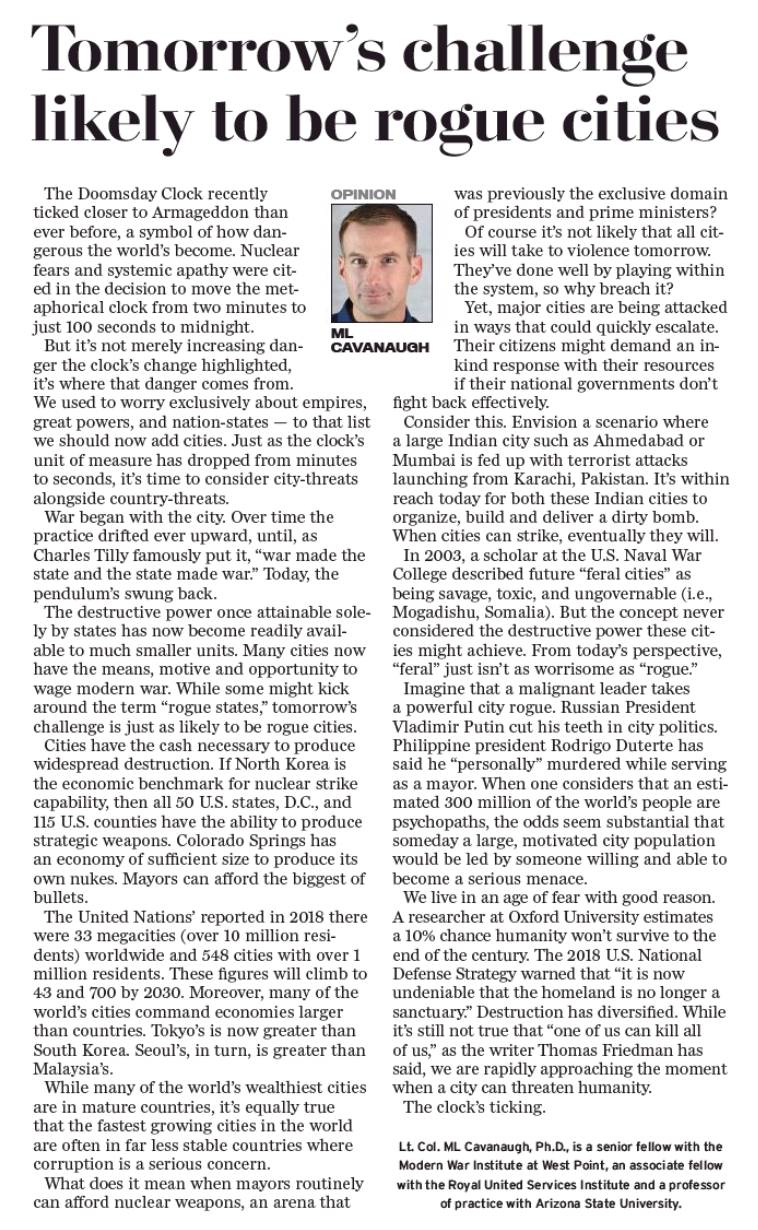 The Doomsday Clock recently ticked closer to Armageddon than ever before, a symbol of how dangerous the world’s become. Nuclear fears and systemic apathy were cited in the decision to move the metaphorical clock from 2 minutes to just 100 seconds to midnight.

But it’s not merely increasing danger the clock’s change highlighted, it’s where that danger comes from. We used to worry exclusively about empires, great powers, and nation-states—to that list we should now add cities. Just as the Clock’s unit of measure has dropped from minutes to seconds, it’s time to consider city-threats alongside country-threats.

War began with the city. Over time the practice drifted ever upward, until, as Charles Tilly famously put it, “war made the state and the state made war.” Today, the pendulum’s swung back.

The destructive power once attainable solely by states has now become readily available to much smaller units. Many cities now have the means, motive, and opportunity to wage modern war. While some may still kick around the term “rogue states,” tomorrow’s challenge is just as likely to be rogue cities.

Cities now have the cash necessary to produce widespread destruction. If North Korea is the economic benchmark for nuclear strike capability, then all 50 US states, D.C., and 115 US counties have the ability to produce strategic weapons. Colorado Springs now has an economy of sufficient size to produce its own nukes. Mayors can afford the biggest of bullets.

A lot of them. The United Nations’ reported in 2018 there were 33 megacities (over 10 million residents) world-wide and 548 cities with over 1 million residents. These figures will climb to 43 and 700 by 2030. Moreover, many of the world’s cities command economies larger than countries. Tokyo’s is now greater than South Korea. Seoul’s, in turn, is greater than all of Malaysia’s.

While many of the world’s wealthiest cities are in mature countries, it’s equally true that the fastest growing cities in the world are often in far less stable countries where corruption is a serious concern.

What does it mean when mayors routinely can afford nuclear weapons, an arena that was previously the exclusive domain of presidents and prime ministers?

Of course it’s not likely that all cities will take to violence tomorrow. They’ve done well by playing within the system, so why breach it?

Yet, major cities are already being attacked in ways that could quickly escalate. Their citizens may demand an in-kind response with their own resources if their national governments don’t fight back effectively.

Consider this. Envision a scenario where a large Indian city like Ahmedabad or Mumbai is fed up with terrorist attacks launching from Karachi, Pakistan. It’s within reach today for both these Indian cities to organize, build, and deliver a dirty bomb. When cities can strike, eventually, they will.

In 2003, a scholar at the US Naval War College described future “feral cities” as being savage, toxic, and ungovernable (i.e., Mogadishu, Somalia). But the concept never considered the destructive power these cities might achieve. From today’s perspective, “feral” just isn’t as worrisome as “rogue.”

Imagine that a malignant leader takes a powerful city rogue. Russian president Vladimir Putin cut his teeth in city politics. Philippine president Rodrigo Duterte has said he “personally” murdered while serving as a mayor. When one considers that an estimated 300 million of the world’s people are psychopaths, the odds seem substantial that someday a large, motivated city population would be led by someone willing and able to become a serious menace.

We live in an age of fear with good reason. A researcher at Oxford University estimates a 10 percent chance humanity won’t survive to the end of the century. The 2018 US National Defense Strategy warned that “it is now undeniable that the homeland is no longer a sanctuary.” Destruction has diversified. While it’s still not true that “one of us can kill all of us,” as the writer Thomas Friedman has said, we are rapidly approaching the moment when a city can threaten humanity.