*Note: This essay was published in the Colorado Springs Gazette print edition on June 1, 2020. An image of the column is included below, as well as the text of the essay. 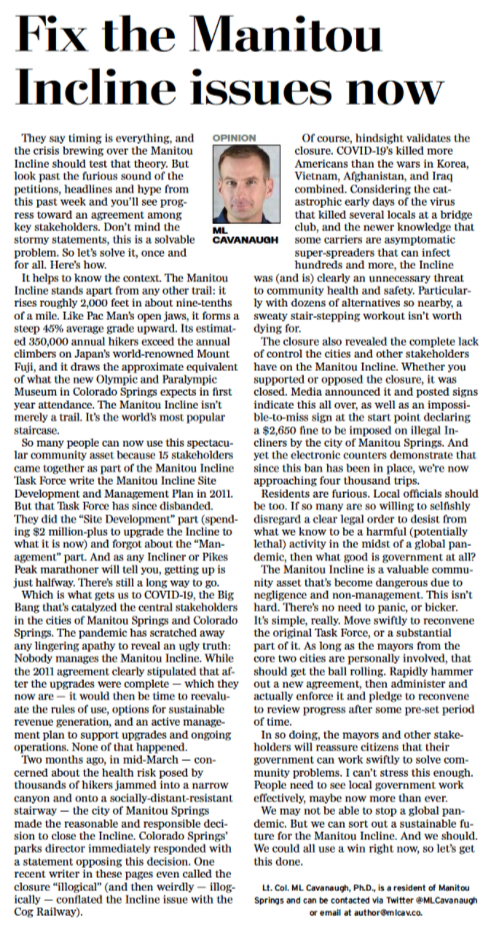 They say timing is everything, and the crisis brewing over the Manitou Incline should test that theory. But look past the furious sound of the petitions, headlines and hype from this past week and you’ll see progress toward an agreement amongst key stakeholders. Don’t mind the stormy statements, this is a solvable problem. So let’s solve it, once and for all. Here’s how.

It helps to know the context. The Manitou Incline stands apart from any other trail: it rises roughly 2,000 feet in about nine-tenths of a mile. Like Pac Man’s open jaws, it forms a steep 45 percent average grade upward. Its estimated 350,000 annual hikers exceed the annual climbers on Japan’s world-renowned Mount Fuji, and it draws the approximate equivalent of what the new Olympic and Paralympic Museum in Colorado Springs expects in first year attendance. The Manitou Incline isn’t merely a trail. It’s the world’s most popular staircase.

So many people can now use this spectacular community asset because fifteen stakeholders came together as part of the Manitou Incline Task Force write the Manitou Incline Site Development and Management Plan in 2011. But that Task Force has since disbanded. They did the “Site Development” part (spending $2 million-plus to upgrade the Incline to what it is now) and forgot about the “Management” part. And as any Incliner or Pikes Peak marathoner will tell you, getting up is just halfway. There’s still a long way to go.

Which is what gets us to Covid-19, the Big Bang that’s catalyzed the central stakeholders in the cities of Manitou Springs and Colorado Springs. The pandemic has scratched away any lingering apathy to reveal an ugly truth: nobody manages the Manitou Incline. While the 2011 agreement clearly stipulated that after the upgrades were complete—which they now are—it would then be time to reevaluate the rules of use, options for sustainable revenue generation, and an active management plan to support upgrades and ongoing operations. None of that happened.

Two months ago, in mid-March—concerned about the health risk posed by thousands of hikers jammed into a narrow canyon and onto a socially-distant-resistant stairway—the city of Manitou Springs made the reasonable and responsible decision to close the Incline. Colorado Springs’ parks director immediately responded with a statement opposing this decision. One recent writer in these pages even called the closure “illogical” (and then weirdly—illogically—conflated the Incline issue with the Cog Railway).

Of course, hindsight validates the closure. Covid-19’s killed more Americans than the wars in Korea, Vietnam, Afghanistan, and Iraq combined. Considering the catastrophic early days of the virus that killed several locals at a bridge club, and the newer knowledge that some carriers are asymptomatic super-spreaders that can infect hundreds and more, the Incline was (and is) clearly an unnecessary threat to community health and safety. Particularly with dozens of alternatives so nearby, a sweaty stair-stepping workout isn’t worth dying for.

The closure also revealed the complete lack of control the cities and other stakeholders have on the Manitou Incline. Whether you supported or opposed the closure, it was closed. Media announced it and posted signs indicate this all over, as well as an impossible-to-miss sign at the start point declaring a $2,650 fine to be imposed on illegal Incliners by the city of Manitou Springs. And yet the electronic counters demonstrate that since this ban has been in place, we’re now approaching four thousand trips.

Residents are furious. Local officials should be too. If so many are so willing to selfishly disregard a clear legal order to desist from what we know to be a harmful (potentially lethal) activity in the midst of a global pandemic, then what good is government at all?

The Manitou Incline is a valuable community asset that’s become dangerous due to negligence and non-management. This isn’t hard. There’s no need to panic, or bicker. It’s simple, really. Move swiftly to reconvene the original Task Force, or a substantial part of it. As long as the mayors from the core two cities are personally involved, that should get the ball rolling. Rapidly hammer out a new agreement, then administer and actually enforce it and pledge to reconvene to review progress after some pre-set period of time.

In so doing, the mayors and other stakeholders will reassure citizens that their government can work swiftly to solve community problems. I can’t stress this enough. People need to see local government work effectively, maybe now more than ever.

We may not be able to stop stop a global pandemic. But we can sort out a sustainable future for the Manitou Incline. And we should. We could all use a win right now, so let’s get this done.