*Note: This essay was published in the Colorado Springs Gazette print edition on August 2, 2020. An image of the column is included below, as well as the text of the essay. 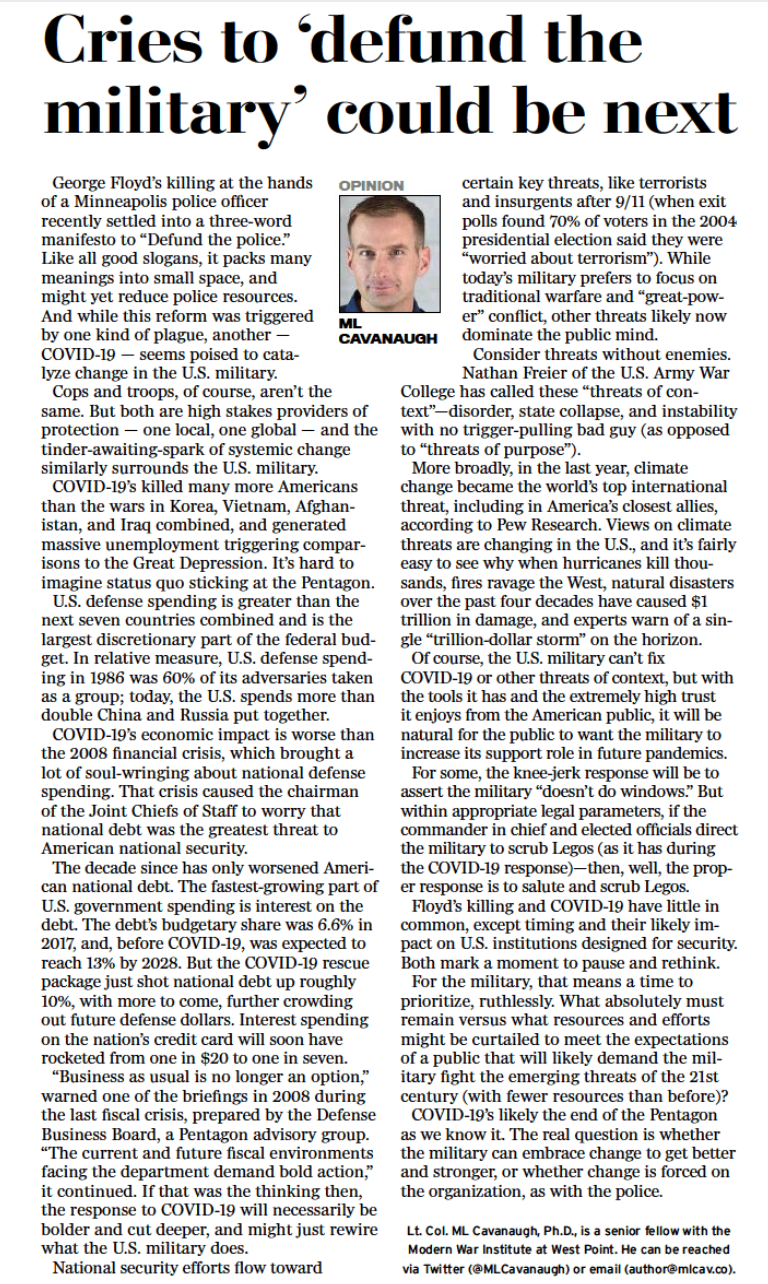 George Floyd’s killing at the hands of a Minneapolis police officer recently settled into a three-word manifesto to “Defund the police.” Like all good slogans, it packs many meanings into small space, and may yet reduce police resources. And while this reform was triggered by one kind of plague, another—Covid-19—seems poised to catalyze change in the US military.

Cops and troops, of course, aren’t the same. But both are high stakes providers of protection—one local, one global—and the tinder-awaiting-spark of systemic change similarly surrounds the US military.

Covid-19’s already killed many more Americans than the wars in Korea, Vietnam, Afghanistan, and Iraq combined, and generated massive unemployment triggering comparisons to the Great Depression. It’s hard to imagine status quo sticking at the Pentagon.

US defense spending is greater than the next seven countries combined and is the largest discretionary part of the federal budget. In relative measure, US defense spending in 1986 was 60 percent of its adversaries taken as a group; today, the US spends more than double China and Russia put together.

Covid-19’s economic impact is already worse than the 2008 financial crisis, which itself brought a lot of soul-wringing about national defense spending. That crisis caused the chairman of the Joint Chiefs of Staff to worry that national debt was the greatest threat to American national security.

The decade since has only worsened American national debt. The fastest-growing part of US government spending is interest on the debt. The debt’s budgetary share was 6.6 percent in 2017, and, before Covid-19, was expected to reach 13 percent by 2028. But the Covid-19 rescue package just shot national debt up roughly ten percent, with more to come, further crowding out future defense dollars. Interest spending on the nation’s credit card will soon have rocketed from one in twenty dollars to one in seven.

“Business as usual is no longer an option,” warned one of the briefings in 2008 during the last fiscal crisis, prepared by the Defense Business Board, a Pentagon advisory group. “The current and future fiscal environments facing the department demand bold action,” it continued. If that was the thinking then, the response to Covid-19 will necessarily be bolder and cut deeper, and may just rewire what the US military does.

National security efforts flow toward certain key threats, like terrorists and insurgents after 9/11 (when exit polls found 70 percent of voters in the 2004 presidential election said they were “worried about terrorism”). While today’s military prefers to focus on traditional warfare and “great-power” conflict, other threats likely now dominate the public mind.

Consider threats without enemies. Nathan Freier of the US Army War College has called these “threats of context”—disorder, state collapse, and instability with no trigger-pulling bad guy (as opposed to “threats of purpose”).

More broadly, in the last year, climate change became the world’s top international threat, including in America’s closest allies, according to Pew Research. Views on climate threats are changing in the US as well, and it’s fairly easy to see why when hurricanes kill thousands, fires ravage the West, natural disasters over the past four decades have caused $1 trillion in damage, and experts warn of a single “trillion-dollar storm” on the horizon.

Of course, the US military can’t fix Covid-19 or other threats of context, but with the tools it has and the extremely high trust it enjoys from the American public, it will be natural for the public to want the military to increase its support role in future pandemics.

For some, the knee-jerk response will be to assert the military “doesn’t do windows.” But the reality is, within appropriate legal parameters, if the commander-in-chief and elected officials direct the military to scrub Legos (as it has during the Covid-19 response)—then, well, the proper response is to salute and scrub Legos.

George Floyd’s killing and Covid-19 have little in common, except timing and their likely impact on American institutions designed for security. Both mark a moment to pause and rethink.

For the military, that means a time to prioritize, ruthlessly. What absolutely must remain versus what resources and efforts might be curtailed to meet the expectations of a public that will likely demand the US military fight the emerging threats of the twenty-first century (with fewer resources than before)?

Covid-19’s likely the end of the Pentagon as we know it. The real question is whether the US military can embrace change to get better and stronger, or whether change is forced on the organization, as with the police.