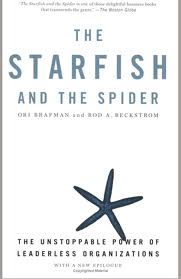 The incoming Chairman of the Joint Chiefs of Staff, GEN Martin Dempsey, recently did an interview with the NY Times in which he revealed that he was currently reading The Starfish and the Spider: The Unstoppable Power of Leaderless Organizations.
Upon learning that, I picked it up from the library and read its 208 pages fairly quickly. The book jacket describes:

This is light, summer or bathroom reading, not disturbed with thick references to detailed study. Each written page goes by quickly and casual readers should not be deterred out of fear of technical language. If I had to use one word to describe the book, it would either be “clear” or “simple.”

Which is principally why the book fails for a military audience, aptly described by HL Mencken, as “for every complex problem, there is an answer that is clear, simple, and wrong.” Although I can’t recall a point at which the authors specifically mention applicability to a military audience, they do use several military examples (Apaches, Cortes, al Qaeda) which indicate at least a tacit connection. Essentially, I think The Starfish and the Spider is an over-broad application of trends related to business/economic models that have adapted to the rise of the internet ~ which has limited utility to a military audience. I also think that the book sets up a false dichotomy between centralized and decentralized features of organizations. Here are my reasons for believing so:

1. The digital world does not have much applicability to the military sphere.

The book spends the vast majority of its full length examples on “music swappers, the Skype callers, the eBay merchants, the Wikipedia contributors, the craigslist community members, the recovering addicts, or anyone who’s ever used the internet.” Outside of some computer-based information and intelligence sharing (a notable trend towards Wiki structures that break stove-piping), these examples are generally inapplicable to a contemporary military audience interested in the threat or use of force for the ends of policy.

An example of this comes from the “rules” developed at the end of the book, specifically, “Rule 5: Everyone Wants to Contribute.” The rule states that “not only do people throughout a starfish have knowledge, but they also have a fundamental desire to share and to contribute.” The problem with this rule as applied to a military environment is that in a military context not everyone has “knowledge,” and, enabling mass-participation in leadership decisions would more likely disable a military organization than make it “unstoppable.”

2. The military examples used are largely irrelevant to an American military audience.

The book’s first military example is of Cortes taking Tenochtitlan, which is provided as a straw man for later examination of Aztecs decentralization. This description of Cortes is meant to portray a good old-fashioned, centralized military tactic: “coercive” force. The Spanish are described as “a centralized body” that “had been used to seeing everything through the lens of a centralized, or coercive, system.”

The problem with this concept is that it fundamentally misreads history. Cortes took Tenochtitlan with 600 Spaniards and another couple thousand locals. Although they did use a “centralized” and “coercive” strategy, one can hardly consider that the most important factor in Spanish victory. The Spanish more likely sailed home thanking their lucky stars for guns, germs, and steel.

The Cortes case sets up the Aztec example:

“When [the Spanish] encountered the Apaches, they went with the tactics that had worked in the past (the take-the-gold-and-kill-the-leader-strategy) and started eliminating [local Aztec leaders]. But as soon as they killed one off, a new [local Aztec leader] would emerge. The strategy failed because no one person was essential to the overall well-being of Apache society.

Not only did the Apaches survive the Spanish attacks, but, amazingly, the attacks served to make them even stronger…This is the first major principle of decentralization: when attacked, a decentralized organization tends to become even more open and decentralized.”

Put bluntly: how did the Apaches fare after the Spanish? If one types in a search for “Apache” today, they find a software, not a group of people. It is clear that decentralization worked to some degree against the Spanish, but did not suffice against the American westward expansion. So was that a “loss” for decentralization that the authors selectively chose to edit? Moreover, militarily-speaking, has there ever been a fully decentralized organization that has fully (or mostly) met its political objectives without centralizing, politically and militarily? [Apaches – no. Basques – no. Palestinians – no. IRA, Israel and Mao – all examples of achievement of political objectives through path from decentralization to centralization].

Overall, the Apache example does not provide much meaningful insight for the military student in the context provided.
3. Some of the book’s principal content is repackaged, without credit, in a less interesting way, from The Tipping Point (by Malcolm Gladwell).

Although a huge fan of the “Everything is a Remix” series, and believe that creativity generally involves a process that includes heavy copying and imitation, it is hard to watch a later idea so similar go without credit.

As stated above, I think the book creates a false dichotomy between an organization’s centralized and decentralized characteristics. However, on page 189, the authors hit the nail on the head when they wrote that “The decentralized sweet spot is the point along the centralized-decentralized continuum that yields the best competitive position.” This is the book’s take-away, and should have been its comprehensive thesis all along, as opposed to just one chapter.

Hybrid organizations that are nimble and adaptive enough to employ both decentralized and centralized features/systems will achieve “success” (defined as both achievement of goals and resilience against the shocks of an unforeseen future). “Centralized” and “decentralized” methods are just methods of attacking problems. Like the foreign policy choice between “unilateral” and “bilateral,” one is not “wrong” or “bad” while the other is “correct” or “good” ~ they’re just characteristics like “black” or “white.” And as in the real world, often the most accurate description is a mix of the two (gray).